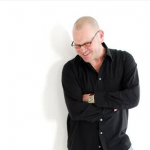 I’m George Reeves (or Revo to my mates!!!) I like copious mugs of tea, chocolate fingers, tennis, watching Reading FC win at the Madejski Stadium on a Saturday, sleeping in on a Sunday, oh yeah…. And beer!!?….

Revo started out as a school nickname which has stuck with me and I now use it as my stage name.
Being the youngest of seven during the early sixties, I was brought up in a house of music. My brothers would be playing all the latest sounds of that time. The Beatles, The Stones, The Who, The Kinks, The Small Faces, The Spencer Davis Group and many many others….

But it was the stuff that my two sisters were playing that really switched the lights on in my brain. Tamla Motown, Stax, Stevie Wonder, Otis Redding, Marvin Gaye, Aretha Franklin, James Brown, all of the soul greats. Then in the late sixties, early seventies, something wild & wonderful happened…. Everything got Funky!!!….

Eventually, as a boy I turned my hand to playing music myself, and to cut a long story short, I went from knocking out a tune on my Gran’s old upright piano, to violin at school, and somehow ended up turning to bass. At this time, with my love for black music, there were no shortage of bassists to inspire me. From Motown’s James Jamerson and Stax bassist Donald “Duck” Dunn, to James Brown’s Bootsy Collins and Sly & the Family Stone’s Larry Graham. I could go on & on as there’s a never ending source of magnificent bassist in the World of Funk & Soul.

I would stick a disc on the turntable, put the needle on the record and then crank the bass up all the way so I could hear & feel what my selected hero was doing….

I have played bass in many bands and worked with many musicians over the years both live and in the studio.

I am currently bassist and backing vocalist with “Little Big Life” www.littlebiglife.net